What to do with a classic design for a contemporary marketplace? Do you play it safe or go wild? Complimentary or contrast?

How about a little of both? Solution? A bright, vibrant tropical fabric with nods of classic 1920s indulgence.

The high back chair lends itself as a canvas to display the intricacies of the tropical design, highlighting each part of the flowers, plants, vines and cute little birds.

This Korean fabric is bold and exciting, contrasting the classic, practical nature of the armchair.

And a simple French polished finish on the wooden frame adds to the traditional look.

This is simply brilliant craftsmanship from Beautility, a pioneering family business and a precursor to Ercol, G-Plan and Stag.

This is a classic example of their ingenuity in incorporating both mid century and art deco design elements. The curvy nature is a consistent theme in Beautility furniture.

The piece has been professionally restored with modern design elements including a contemporary sage and white combination, giving a clean, crisp feel. New ceramic and brass pumpkin pulls have been added to lend a really fun element.

The original walnut veneer has been French polished to invigorate its gorgeous complex grain.

When we were contacted by a client asking if we could restore and invigorate a 1920s gramophone unit and upcycle it into a stylish drinks cabinet we really didn’t know what to expect.

Firstly, the cabinet was a solid, well made piece. It was crafted with a mix of oak, pine, mahogany and rosewood. It had all of its original parts with beautifully intricate mouldings and the wood hadn’t cracked or chipped in any significant way. And the gramophone still worked!

So, good news? Yes and no. The frame was in really good condition, less a couple of expected dinks it incurred over the last century. But arguably the cabinet’s best feature, the rosewood doors were in a bad way.

Sometime over the last 100 years the doors had succumbed to water damage. When wood has been soaked in water the damage often occurs after the water evaporates as it takes the wood’s natural oils with it, leaving the wood dry, brittle and warped. And that’s what happened here.

But we were in luck. We removed the varnish from the surface to assess the damage. Underneath shone a dusky pink wood that hadn’t seen daylight in a century and it looked glorious. But it was thirsty.

The wood desperately needed a drink. And who wouldn’t after 10 decades? So we fed it a rich, slow-curing tung oil and it soaked it up. While it was bathing in the oil, we gently clamped the rosewood to bend those warped doors back into shape. It was a slow process but the results speak for themselves.

The rest of the cabinet looked good but not as dazzling as it should. It was looking a little flat, partly because every piece of timber was the exact same shade of dark brown. We wanted to celebrate its unique form and highlight the differences between a beautifully reddish mahogany to a mellow, warm oak. We wanted to see the contrast of a glowing rosewood and a sunny pine.

But we also wanted another, bigger contrast. We wanted the cabinet to represent a period of history all about contrast. Prohibition. The world of speakeasys and gin joints. The world of a respectable exterior and a scandalous interior.

While a professional and respectful restoration was what was called for on the outside, we wanted the inside to be rebellious, rambunctious and downright raunchy!

Tropical teal prints gave the cabinet an energetic and exotic feel while gold trims made it deep luxurious and a navy blue background leant a touch of maturity. And an LED downlight to brighten an enlighten finishes it all off.

And here we have it…

The classic farmhouse chair is timeless. Strong, aesthetically pleasing and unlikely to cause offence.

But it’s also a bit of a blank canvas waiting for energy and colour.

So we took this classic piece of dining room furniture and gave it some edge.

Floral designs aren’t resigned to your granny’s curtains. They can be modern and edgy.

By hand painting a tattoo style bouquet of roses we added a contemporary feel to a reliable pine chair.

By painting the chair in Frenchic Cream Dream chalk paint and giving it a comforting distressed look before speaking it in wax, we were able to give the feeling of familiarity. By contrasting that feeling with a bold and vibrant bunch of roses the juxtaposition of the two contrasting styles works beautifully.

Just watch out for those thorns before sitting down! 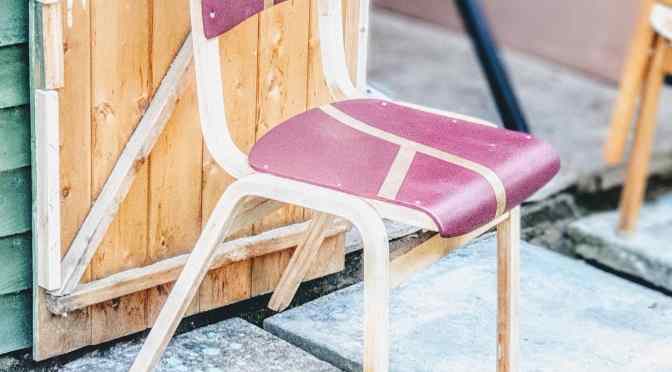 For everyone over a certain age these chairs are instantly recognisable.

Very functional and easily stackable, these chairs were the popular choice of classrooms, church halls and community centres everywhere.

But they were gradually replaced for cheap, bulky plastic chairs with no character and sweaty-back inducing properties!

But those that survived the cull needed modernising.

So we stripped the yellowish varnish from the legs and painted the seat and back in luxuriously deep burgundy and opulent gold in a bold geometric pattern.

When there’s something as brutally practical and everyday as a cable reel there’s a real temptation to hide its nature.

Maybe splash is in colour or adorn it with trinkets and baubles to mask its very functional intention.

But we went another way. We stared at the cable reel’s soul and decided to celebrate its essence. It’s a tough, hard wearing piece of equipment found on every construction site and we love what it does.

To keep its essence intact, we went for simple, clean, minimalist colours and features.

We added a sheet of custom cut steel but we didn’t polish it to a high mirror gloss. We kept it smooth, sleek and industrial.

We could’ve airbrushed the hairpin legs glossy orange or bright gold. But we kept them raw and bare.

And we finished the timber frame in a cool and stylish slate grey.

We love a cable reel and we salute its natural state. 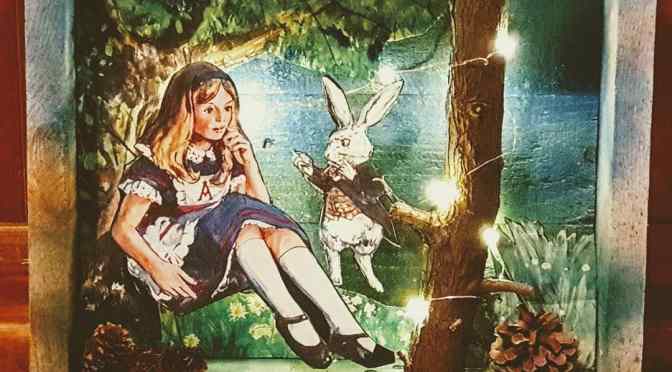 There are very few things as timelessly imaginative and universally appealing as Alice in Wonderland.

Even to those rarest of species, the uninitiated into the classic Lewis Carroll novel, everyone know an Alice reference.

From the March Hare to the Mad Hatter it’s imagery has permeated the imagination of everyone.

So what’s more comforting, reassuring and homely than our handmade nightlight?

Made from original vintage artwork from salvaged classic books and reclaimed timber, we set the characters and scenery in a 3D world by setting them at different perspectives.

And we surrounded it with the gentle twinkling glow of some LED lights. 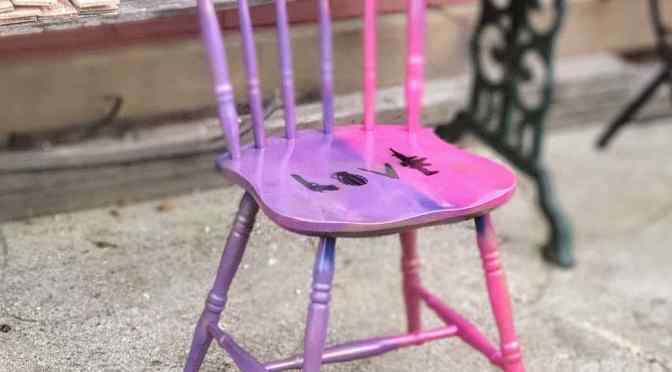 Why settle for the plain and mundane when you can have bright colours, vibrancy and pizazz?

By airbrushing this pine chair in dazzling pinks and purples and literally splashing it with flecks of gold, we’ve made chair a real statement piece.

No longer consigned to the kitchen table we’ve set this chair free to roam any office, study, or bedroom to bring the style, confidence and boldness of punk rock into any space that needs colour and energy.

Made from reclaimed timber and fitted with gently twinkling led lights, we love this piece.

Invoking feelings of nature and the smell of pine trees, this is a lovely homage to Mother Nature herself. 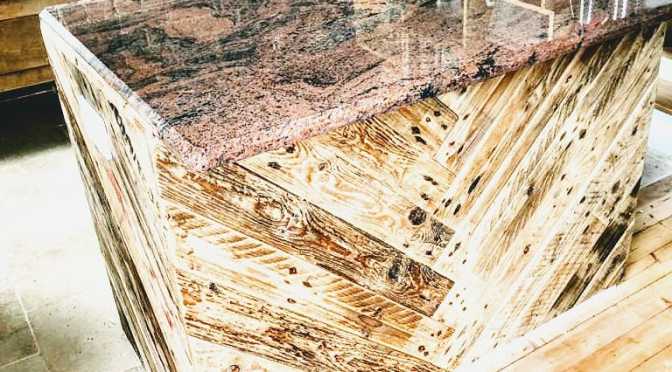 When working with reclaimed and salvaged materials it’s important to have a keen eye. Not all wood is made equal.

With this custom made piece we selected from a variety of of different types of wood…and from a lot of unlikely sources.

This piece was made from a mixture of timber sourced from a lot of different places. Notice the partially faded panel with ‘Guinness’ on it from a vintage crate.

The combination and contrast of wood combines to makes one cohesive piece. 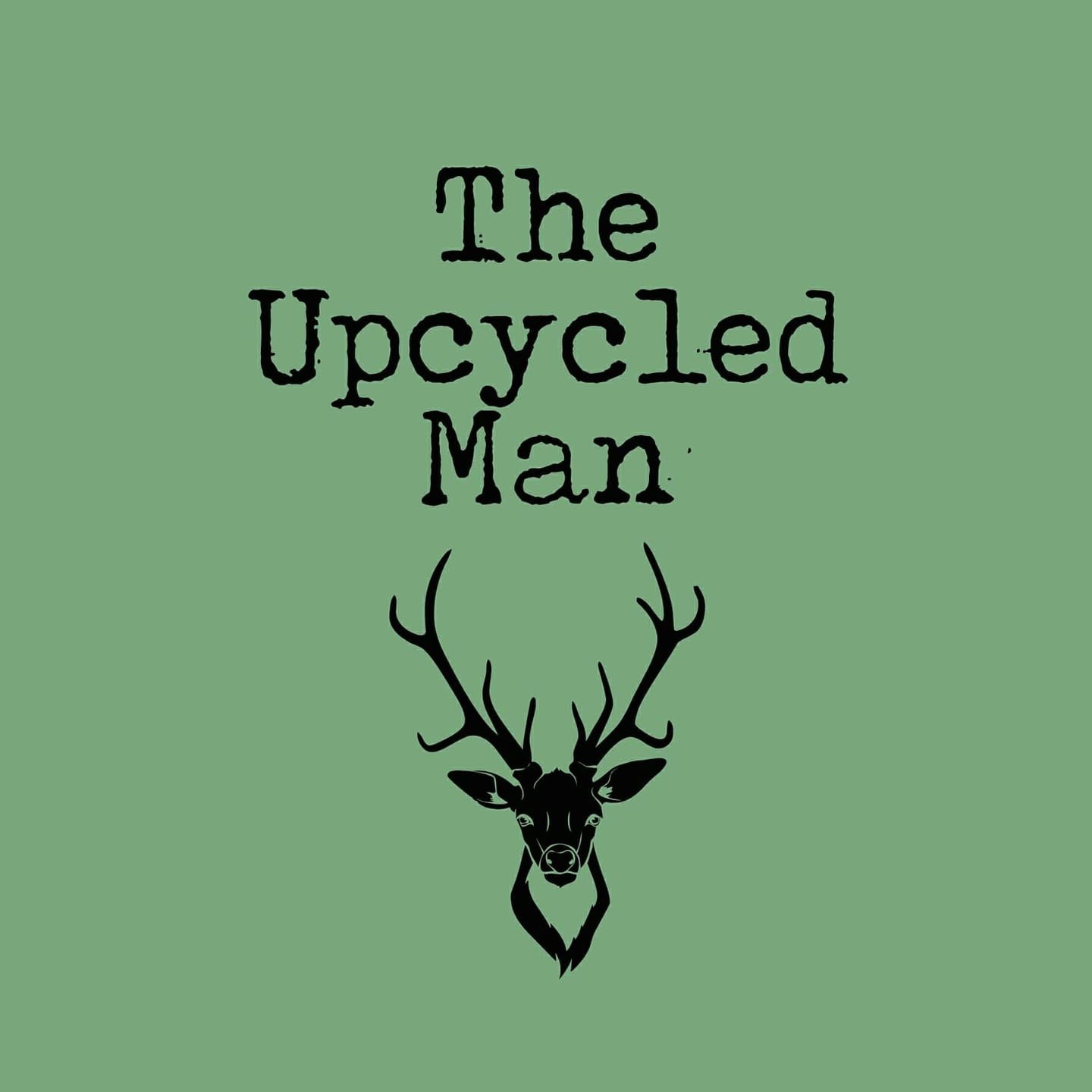